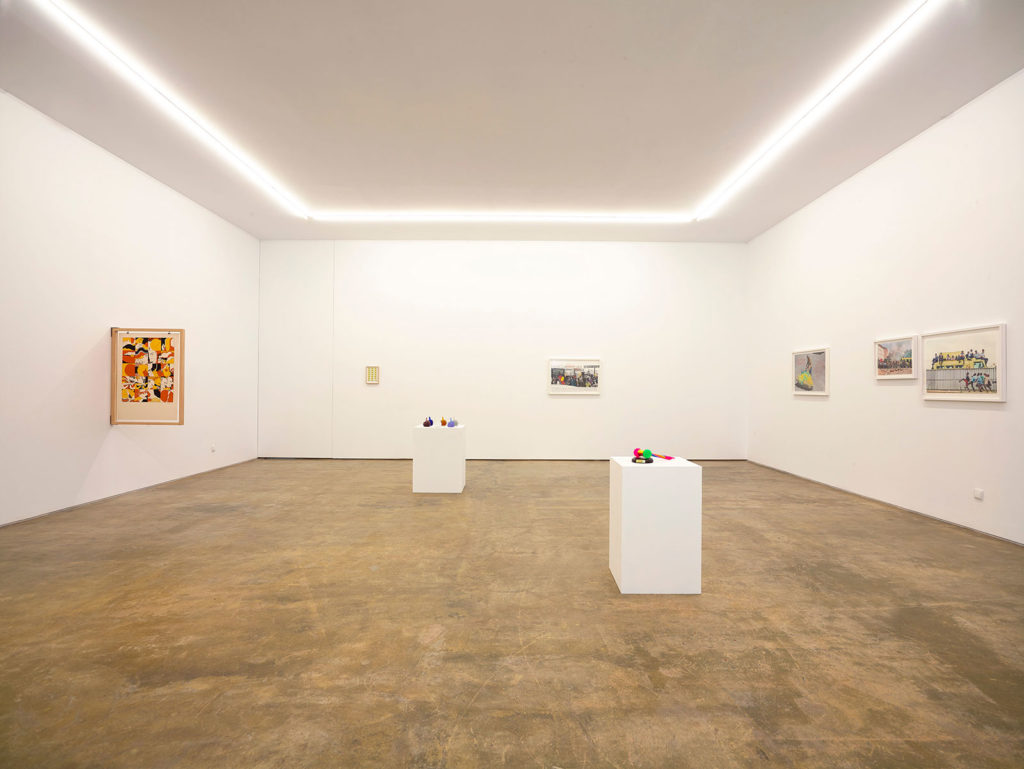 In this exhibition emblematic artworks are on view, namely Ai Weiwei’s “Study of Perspective in Glass”, which crystallises a symbol of protest and revolt against forms of organisation in contemporary society. Graeme Williams’ 1991 photographic work “Toyi-Toyi” from his renowned ‘Struggle for Democracy’ series, that became one of the symbols of the end of Apartheid in South Africa, which was later appropriated in 2008 by Hank Willis Thomas, triggering a copyright dispute. It is also shown António Ole’s iconic work, “On the Taking the Pill (1970)”, one of the first works by African artists on this subject, which is here revisited through a limited serigraph edition celebrating women’s rights.

RED TAPE incites people to reflect on fundamental rights and freedoms which should be permanently vindicated.

Open to the public until 12 July. 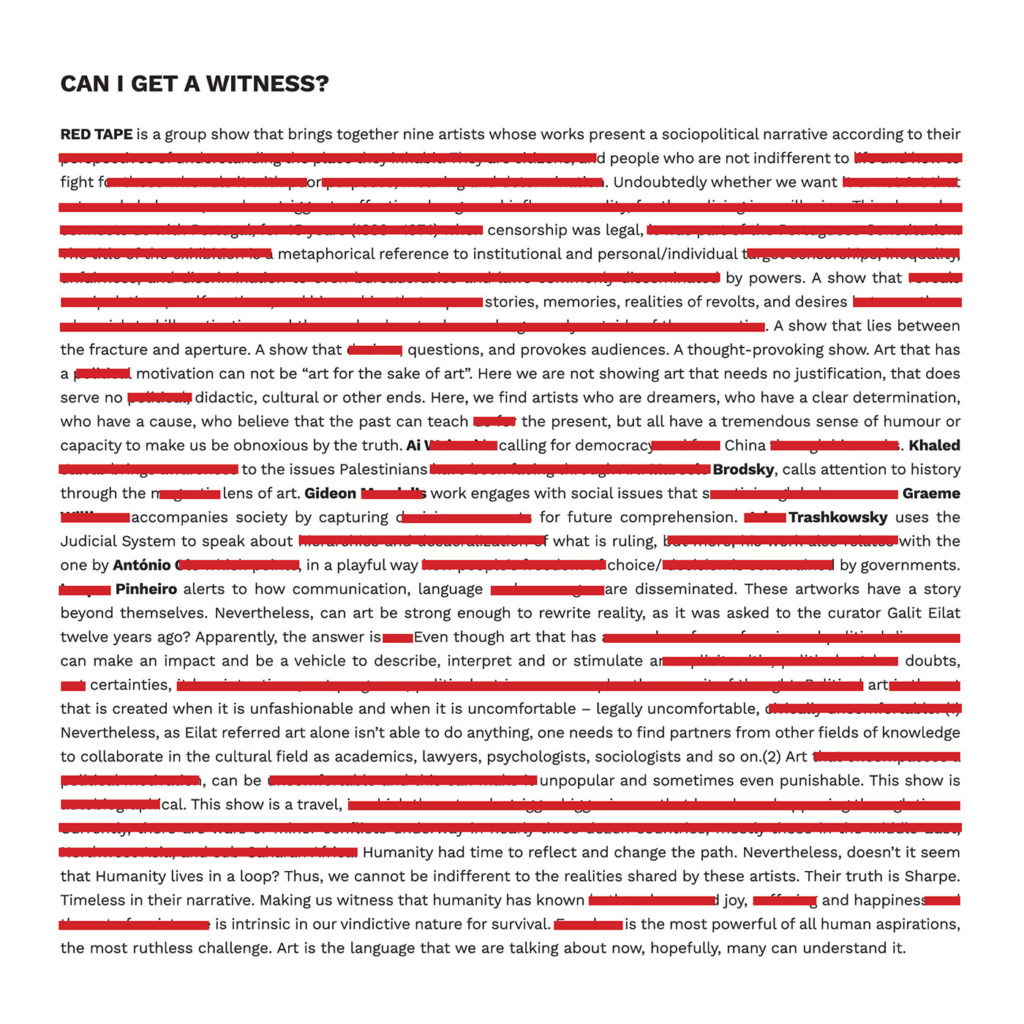 Ai Weiwei (1957, Beijing) lives and works in multiple locations, including Beijing (China), Berlin (Germany), Cambridge (UK) and Lisbon (Portugal). He is a multimedia artist who also works in film, writing and social media.

Graeme Williams was born in Cape Town, South Africa. Williams, for more than thirty years, has worked on highly personal photographic essays reflecting his response to South Africa’s complex evolution. His work has been shown in solo exhibitions in South Africa, the USA, France, Portugal and the United Kingdom as well as many collective shows including the Figures and Fictions (2011) at London’s Victoria and Albert Museum. In 2014 a set of images from the series A city refracted was included in the Aperture Summer Open in New York. In 2017 images from the series, As the grass grows, were included in the Louis Vuitton Foundation’s Being There, a collective exhibition showcasing contemporary South African art. In 2008, as Barack Obama sought the Presidency and raced for the position against John McCain, Newsweek magazine ran a story asking each candidate to choose an image that best personified their worldview. Obama’s team chose a township image that Williams took in 1991. His work is featured in several permanent collections including The Smithsonian (USA), The South African National Gallery (SA), The Rotterdam Museum of Ethnology (Holland), Duke University (USA), The North Carolina Museum of Art (USA), The St. Petersburg Museum of Fine Arts (USA), The Finnish School of Photography, and Cape Town University (SA).

An artist’s biography is something that is developed over time and can manifest itself as parallel to the work, a right and a poetic freedom. In the case of Isaque Pinheiro, born in 1972 in Lisbon, we can reinforce the idea of the biography, as something designed and constructed.  Isaque Pinheiro has shown his work in several art galleries, museums and biennials including Stenersen Museum (Oslo, Norway), The Galician Contemporary Art Centre (CGAC) (Spain), Caixa Cultural do Rio de Janeiro (Brazil), XXI International Biennial of Cerveira (Portugal), Trio Bienal (Brazil), Maia Biennial (Portugal), European Culture Capital (Portugal), Soares dos Reis Museum (Portugal).

The art of John Trashkowsky is a sharp and satirical observation of societal topics, with timeless conclusions. His remixes and new interpretations of everyday objects turn big questions of our time into unique artworks. The mission is to surprise us out of our antipsychotic, coffee-swilling, anxiety-ridden pill-popping paranoia with products that make us want to jump out of our skin, with joy or irritation. His work was presented in New York, Barcelona, Paris, Berlin, Hamburg, Munich, Basel, Zurich, Sophia, Moskau, Seoul, Hong Kong and many other locations.

Khaled Jarrar’s work explores modern power struggles and their sociocultural impact on ordinary citizens. He completed his studies in interior design at the Palestine Polytechnic University in 1996, and began working in photography. He garnered significant attention for his exhibition in 2004 at the Howarra and Qalandya checkpoints where his photos were displayed to attract the attention of Israeli soldiers. In 2011 he graduated from the International Academy of Art (Palestine). His recent work “Live and Work in Palestine” was the first unofficial Palestinian stamp. Khaled used it to stamp passports of people from all nationalities who volunteered. The everyday objects appearing in Jarrar’s reflective work, whether by their shape or nature, are juxtaposed with the severity of the issues he examines, giving the political content of his art greater significance while underscoring the autobiographical nature of his themes.

Marcelo Brodsky is considered one of the most important contemporary artists in Argentina, being an international visual artist and a human rights activist, he focuses on visual language, Memory and Human Rights. Predominantly working with images, text and archival documents on specific events to investigate social, political, historical realities deserving of public awareness, where he tried to build up alternative narratives.

He has been awarded with distinctions and received many accolades, such as the Dr. Jean Mayer Award of Global Citizenship at Tufts University, Boston (2015) and The B’nai Brith Award for Human Rights (2003), among others. His work has been shown in numerous solo and group exhibitions in Argentina, Portugal, Brazil, Chile, Uruguay, Peru, Spain, France, Germany, Switzerland, Italy, Czech Republic, United Kingdom, Israel and USA, among others. His work is part of major collections such as: Tate (UK), MET–The Metropolitan Museum of Art New York (USA), Pinacoteca del Estado, São Paulo (BR), National Museum of Fine Arts (AR), Museum of Fine Arts, Houston (USA), Jewish Museum, New York (USA), Moderno Museum Buenos Aires (AR), among others.

Gideon Mendel’s intimate style of image-making and long-term commitment to socially engaged projects has earned international recognition. Born in Johannesburg in 1959, Mendel began his career as a news and ‘struggle’ photographer documenting the final years of apartheid in South Africa. This experience marked him deeply, and much of his subsequent work has been engaged with the key issues facing his generation. In 1991 he moved to London, and continued to respond to global concerns, especially HIV/AIDS. Since 2007, using stills and video, Mendel has been developing a variety of narrative threads in response to our global climate emergency.  For many years his main focus was Drowning World, an art and advocacy project about flooding. This work has been seen in many publications including National Geographic, Geo and the Guardian Magazine. Along with this his images have been used in many climate protests, while his photographs and video pieces are increasingly seen in a variety of gallery and museum contexts. More recently Mendel has extended his work about climate change to incorporate the element of fire with the Burning World project. He has received the inaugural Jackson Pollock Prize for Creativity and the Greenpeace Photo Award. Shortlisted for the Prix Pictet in 2015 and 2019, he has also received the Eugene Smith Award for Humanistic Photography, the Amnesty International Media Award, and six World Press awards.