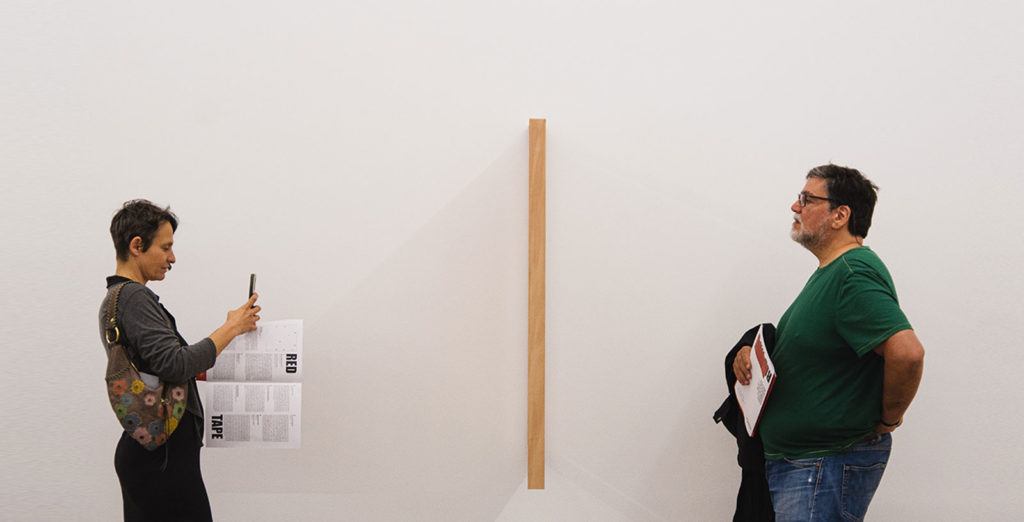 The .insofar art gallery is proud to present António Ole’s most recent art project – In dialogue with…, which consists of a series of serigraphs, based on one of his emblematic works from the 1970s “On the Taking the Pill”, which is accompanied by an original essay by the art curator Paula Nascimento written on the back.

It is a limited hand silkscreen edition 28 + 3 AP, which corresponds to 28 days that women use birth control pills and 3 days of rest.

“(….) a work that engages the viewer at different scales and levels. One way to address it is related to the feminist revolution and the sexual rights debate. With irony and sarcasm, the work directly responds to the position of the Catholic Church on the use of contraceptives. In “feminism is for everybody”, bell hooks highlights the importance of autonomy over the body as a starting point for freedom – female sexual freedom requires reliable and safe birth control, without which women cannot exercise complete control over the outcome of sexual activity (…)” 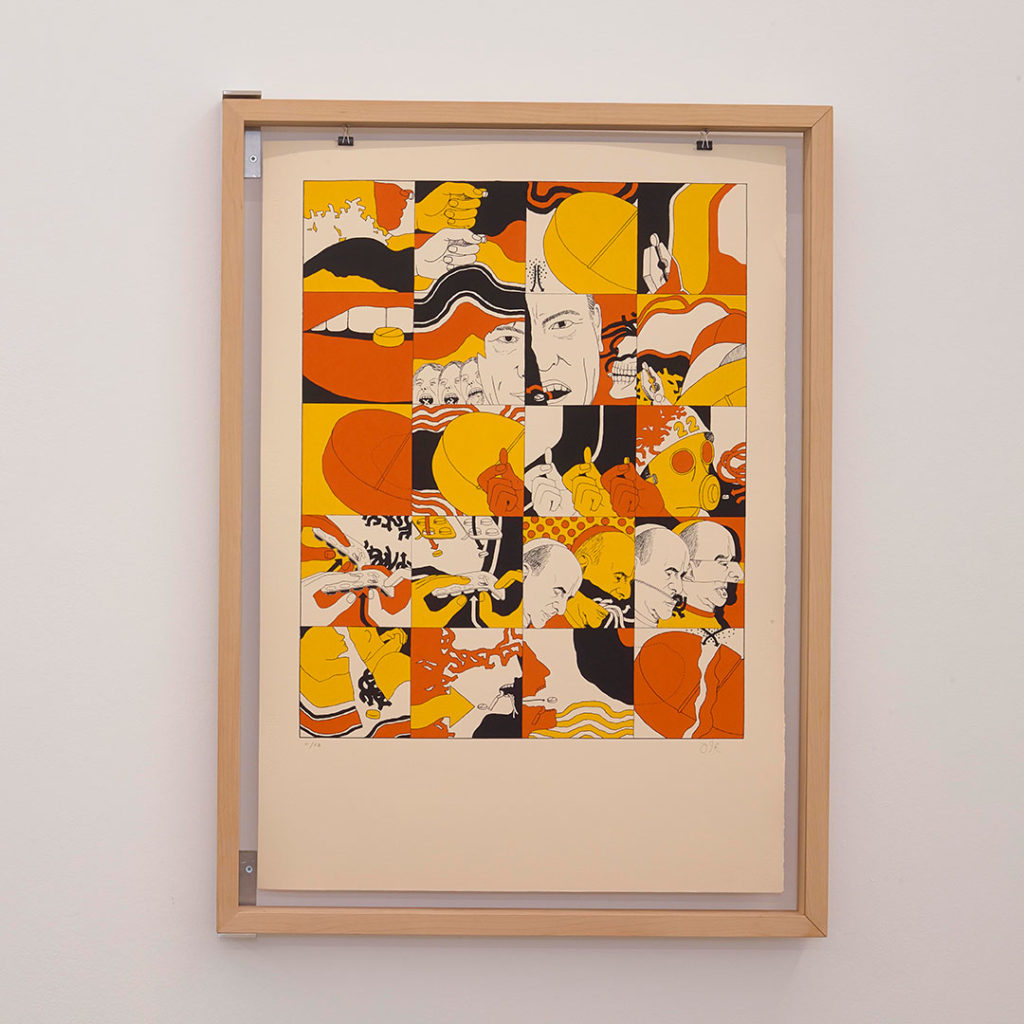 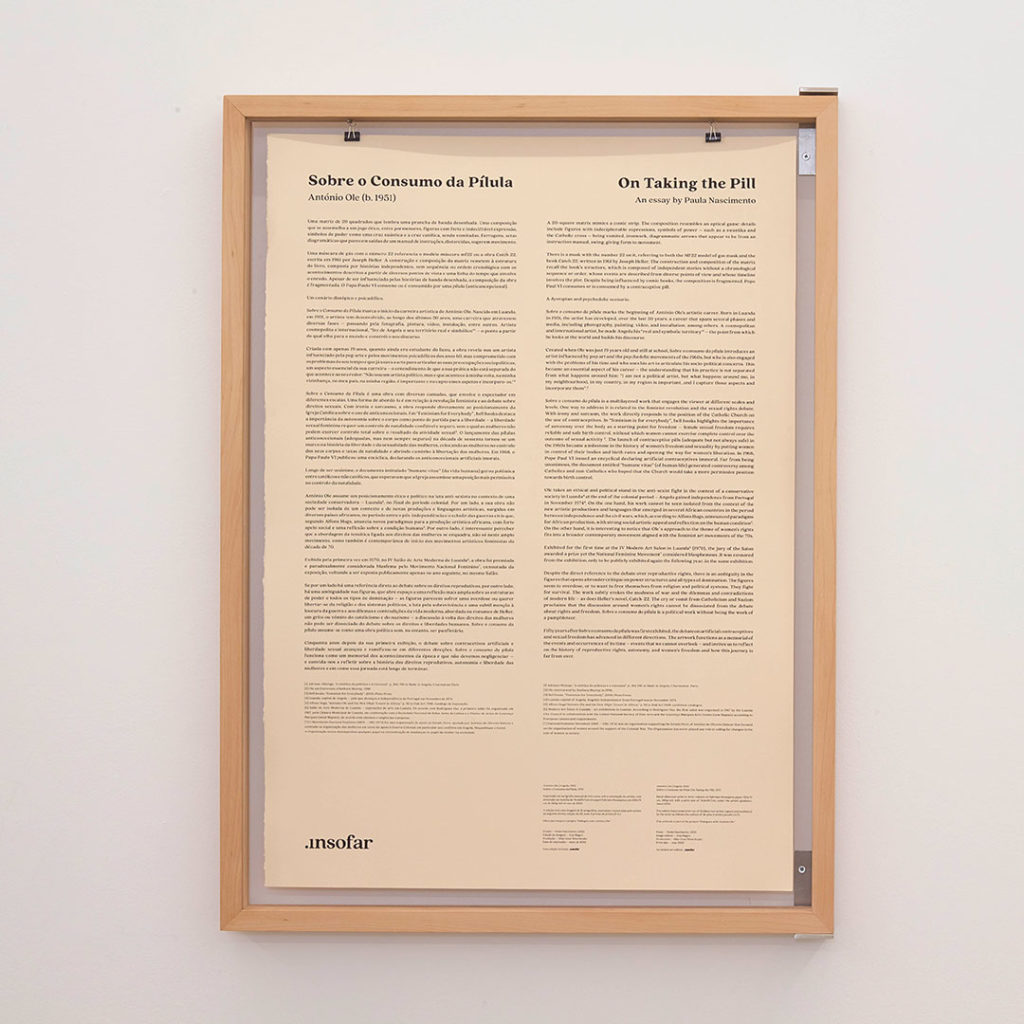 On taking the pill
Essay by Paula Nascimento, 2022

A 20-square matrix mimics a comic strip. The composition resembles an optical game: details include figures with indecipherable expressions, symbols of power – such as a swastika and the Catholic cross – being vomited, ironwork, diagrammatic arrows that appear to be from an instruction manual, swing, giving form to movement.

There is a mask with the number 22 on it, referring to both the MF22 model of gas mask and the book Catch 22, written in 1961 by Joseph Heller. The construction and composition of the matrix recall the book’s structure, which is composed of independent stories without a chronological sequence or order, whose events are described from diverse points of view and whose timeline involves the plot. Despite being influenced by comic books, the composition is fragmented. Pope Paul VI consumes or is consumed by a contraceptive pill.

A dystopian and psychedelic scenario.

Sobre o consumo da pílula marks the beginning of António Ole’s artistic career. Born in Luanda in 1951, the artist has developed, over the last 50 years, a career that spans several phases and media, including photography, painting, video, and installation, among others. A cosmopolitan and international artist, he made Angola his “real and symbolic territory”[1] – the point from which he looks at the world and builds his discourse.

Created when Ole was just 19 years old and still at school, Sobre o consumo da pílula introduces an artist influenced by pop art and the psychedelic movements of the 1960s, but who is also engaged with the problems of his time and who uses his art to articulate his socio-political concerns. This became an essential aspect of his career – the understanding that his practice is not separated from what happens around him: “I am not a political artist, but what happens around me, in my neighbourhood, in my country, in my region is important, and I capture those aspects and incorporate them”.[2]

Sobre o consumo da pílula is a multilayered work that engages the viewer at different scales and levels. One way to address it is related to the feminist revolution and the sexual rights debate. With irony and sarcasm, the work directly responds to the position of the Catholic Church on the use of contraceptives. In “feminism is for everybody”, bell hooks highlights the importance of autonomy over the body as a starting point for freedom – female sexual freedom requires reliable and safe birth control, without which women cannot exercise complete control over the outcome of sexual activity [3]. The launch of contraceptive pills (adequate but not always safe) in the 1960s became a milestone in the history of women’s freedom and sexuality by putting women in control of their bodies and birth rates and opening the way for women’s liberation. In 1968, Pope Paul VI issued an encyclical declaring artificial contraceptives immoral. Far from being unanimous, the document entitled “humane vitae” (of human life) generated controversy among Catholics and non-Catholics who hoped that the Church would take a more permissive position towards birth control.

Ole takes an ethical and political stand in the anti-sexist fight in the context of a conservative society in Luanda[4] at the end of the colonial period – Angola gained independence from Portugal in November 19744. On the one hand, his work cannot be seen isolated from the context of the new artistic productions and languages that emerged in several African countries in the period between independence and the civil wars, which, according to Alfons Hugs, announced paradigms for African production, with strong social artistic appeal and reflection on the human condition[5]. On the other hand, it is interesting to notice that Ole´s approach to the theme of women’s rights fits into a broader contemporary movement aligned with the feminist art movements of the 70s.

Exhibited for the first time at the IV Modern Art Salon in Luanda[6] (1970), the jury of the Salon awarded a prize yet the National Feminine Movement[7] considered blasphemous. It was censored from the exhibition, only to be publicly exhibited again the following year, in the same exhibition.

Despite the direct reference to the debate over reproductive rights, there is an ambiguity in the figures that opens a broader critique on power structures and all types of domination. The figures seem to overdose, or to want to free themselves from religion and political systems. They fight for survival. The work subtly evokes the madness of war and the dilemmas and contradictions of modern life – as does Heller’s novel, Catch-22. The cry or vomit from Catholicism and Nazism proclaims that the discussion around women’s rights cannot be dissociated from the debate about rights and freedom. Sobre o consumo da pílula is a political work without being the work of a pamphleteer.

Fifty years after Sobre o consumo da pílula was first exhibited, the debate on artificial contraceptives and sexual freedom has advanced in different directions. The artwork functions as a memorial of the events and occurrences of its time – events that we cannot overlook – and invites us to reflect on the history of reproductive rights, autonomy, and women’s freedom and how this journey is far from over.

[1] Adriano Mixinge, “a estética da pobreza e a travessia”, p. 184/190 in Made in Angola, L’harmattan, Paris.
[2] Ole interviewed by Barbara Murray in 1998.
[3] Bell hooks, “Feminism for Everybody”, 2000, Pluto Press.
[4] Luanda, capital of Angola. Angola’s Independence from Portugal was in November 1974.
[5] Alfons Hugs“Antonio Ole and the New Objet Trouvé in Africa,” p. 95 in Dak’Art 1998: exhibition catalogue.
[6] Modern Art Salon in Luanda – art exhibitions in Luanda. According to Rodrigues Vaz, the first salon was organised in 1967 by the Luanda City Council in collaboration with the Lisbon National Society of Fine Arts and the Lourenço Marques Arts Center (now Maputo) according to European canons and requirements.
[7] National Feminine Movement (MNF – 1961-1974) was an organisation supporting the Estado Novo of António de Oliveira Salazar that focused on the organisation of women around the support of the Colonial War. The Organisation has never played any role in calling for changes in the role of women in society.

António Ole is a leading figure in the history of artistic developments in Angola and one of the most active on the international contemporary art scene among Portuguese-speaking African artists. His rich and diversified visual universe is bound in the vivid intersection of direct observation, historical memory, far-reaching references and pressing contemporary issues such as poverty, inequity, migration, corruption and unsustainable development. His immediate cultural and natural surroundings are continuous sources of inspiration. Throughout his work, the artist often pays tribute to the simple beauty and spontaneous creativity thriving among the Angolan population and which are noticeable in all aspects of people’s daily lives. His multimedia inventiveness ranges from cinema, video and photography to drawings, collages, paintings, sculptures and monumental installations. In spite of his deep commitment to confront reality and to trigger social and political changes via his artistic outputs, Ole’s oeuvre is infused with poetry and a remarkable oneiric dimension. Thereby, the artist conjures up a sensitive and imaginative world, which opens the door to the potentialities of fiction and strata of perception.